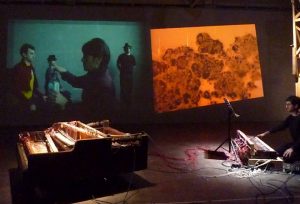 MUSIC OF TASTE was performed at the experimental stage of the CheLA Institute in Buenos Aires, Argentina in June 2012. It was a one-time performance for a life audience combing the taste of food with contemporary music, dance-performance and video art. In this performance I made reactions on stage in painting to the music performed. The paintings were made with different ‘uncommon’ materials. The painting action was filmed and projected directly on a big wall behind the musicians, so sound and image were presented at the same time in space.

The flavors in this project were represented in 4 different colors. Unami is a discussable subject, as it can be perceived as a sensation, rather than stimulation.

Salt stands for death. Nothing grows on salt. But it is a mineral that is necessary to live. Salt is involved in regulating the fluid balance of the body. The sodium ion itself is used for electrical signaling in the nervous system. Too much salt can cause mail function of certain organs or high blood pressure and consuming large quantities will cause death. Its natural color is pale pink or light grey, but I want to indicate it with blue. Blue is an introvert color. It is the reflection of black: think about the blue sky or the sea, being the reflection of the black universe. Blue does not invite to be eaten. Animals and plants that are truly blue colored are very scarce. Blue is the most non alive color in the spectrum. Its opposite is red. Red represents life. Red indicates passion, lust and warmth. Sweetness brings energy. It is the taste that is the most strong in our memory buildup. The visualization of an object that could be sweet (an image of piece of cake for instance) immediately produces a sensation of wanting. The sensation is so overwhelming that we sometimes do not remember if we tasted or smelled the object in the past. The third opposite taste is sour. Sour stands for aggression: acid eating a surface. I connect it with the color yellow. In nature yellow is used to indicate danger (think about the stripes on a wasp or a snake). It is the color of warning for a possible dangerous situation. The vibration of the color is the most intense of all the colors. Combining these three color-flavors produces bitterness. It is the center in the triangle between the other three colors. Mixing red with green (yellow and blue) gives a brown color. It is the center. It is soil that contains the three other flavors. It is the foundation to grow from. There for bitterness is presented by the color brown.

Color, taste, sound, feelings are all subjects that have an expression for themselves. They are measurable subjects. A color does not change its vibration from within itself. An object is not harder or softer at the same time, etc. They are basic rules that make a subject contain its characteristics. Everybody should be able to see a color the same way, in the same personal context. The difference is the form to perceive it: the expression of it. Expression is a mirror image from the spectator. Presentation exists because the spectator exists. The expression tastes, shapes, colors, sounds or feelings have to us is made up by our personal history. They make a direct link with our memory. Because the spectator is in a specific energy at a certain time (mood) he/she will focus on certain colors. According to the importance of the situation that constructed the moment perceived in the past, the intension will focus on it more strongly as to other situations that are perceived in the present. “What you see-hear-taste-smell-feel is what you are”. It is not who you are, as you are just an existing live form, but what your personal experiences tell you at a certain manifestation in time: what your state of being is. The feeling produced with a link of a particular color to a certain sound or taste is a personal decision originated from the basic rules of the subject. The project Music of Taste originates and departs from these basic rules.